I’ve been in the land of bikes, canals, windmills and stroopwafels for just over a month now and am absolutely loving it. I’m staying in a town called Tilburg, which is approximately an hour and half from Amsterdam and an hour from the Belgian border.

Tilburg is a student town and while it doesn’t have the excitement of Amsterdam, there’s certainly no shortage of things to do. 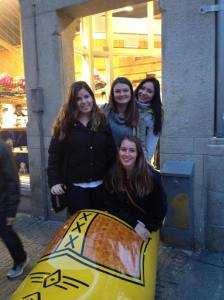 This is probably largely due to the fantastic student organisation (IESN) that organises many social events around the city. Last week IESN organised a trip to Amsterdam including a stopover at a traditional dutch windmill farm.

Joining IESN, and living in Verbs, a very social block of student flats right near the uni, it’s almost impossible not to make friends. 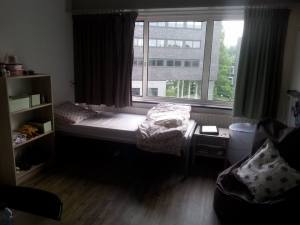 Staying at Verbs has been the best decision I could have made. I have 17 other flatmates who are from Singapore, China, Spain, France, the US, Italy and Hungary to name a few! Our floor feels like a family already. There’s always someone to chat to and always delicious smells coming from the kitchen!

One of the advantages of staying in Tilburg is the proximity to an international airport (Eindhoven) that is a hub for cheap flights. This combined with good train and bus connections make it a very easy place to use as a base to travel to other parts of Europe. So far I’ve been to Brussels, Paris and Munich am currently planning a trip to Dublin and London.

The classes itself have been interesting and worthwhile. I must admit, I viewed the actual study part of the exchange as a secondary concern to all the travel and socialising I planned to do. However i’ve found myself really enjoying the subjects on offer. Tilburg’s law faculty appears to be progressive and human rights focused. Some of my subjects include Privacy and Data Protection, Genocide and War Crimes and Theories and Perspectives on Victimization.

Overall, i’d definitely recommend Tilburg. I haven’t met anyone who has regretted it yet!

Are you looking to have a positive impact on the world? Look no further than Climate Action Virtual Internships this summer! 🌏
What is cultural intelligence (CQ) and why do you need it? 🌏🤔
Interested in studying overseas for a session or two?
Did you know that by completing a Virtual Global Short Program you earn 20 elective points towards the @utsbuild global leadership program?
Do you look at the world and wonder how we'll solve our biggest problems? 🌏🤔 Then the Global Leadership Forum Asia-Pacific, presented by UTS BUILD, is for you!
Happy StuVac! Think Global wishes you a restful and productive week.