Now before I tell you about how absolutely amazing Tilburg is as an exchange city (and this is only after 1 week!) I will tell you about my pre-exchange travels across Croatia and Greece.

After travelling for over 36 hours straight I finally arrived in Croatia with my girlfriend totally exhausted, hungry and confused over whether the currency was Euros or Kunas – turns out it’s a mixture of both! So for the next week we sailed the seas of Croatia, hopping from island to island, from party destination to party destination, all the while soaking up the sun. Croatia honestly has some of the most naturally beautiful scenery I have ever seen. From diving off a 51 foot yacht into crystal water, to swimming in waterfalls, to getting free shots in an ice bar, I have nothing bad to say about Croatia. Without a doubt I will be heading back there sometime in the future and I can definitely recommend it to those of you wanting to travel around Europe. Seriously do it!

So with my skin nowhere near as tanned as I hoped it would be after 10 days in Croatia we headed off to Greece to relax and party on the islands of Mykonos, Santorini and Milos. Mykonos was my first stop and personally I wasn’t the biggest fan of it as I was a bit underwhelmed by the party scene on the island. I was expecting Mykonos to be like Surfers Paradise on steroids, but it really wasn’t that special. However my disappointment with Mykonos was more than made up for by Santorini and Milos. You can’t really go past Santorini as one of the most beautiful places in the world and if you really don’t believe it’s beauty have a look at the picture below! 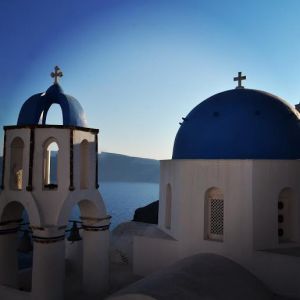 But as much as I loved Santorini, my favourite Greek island has to be Milos. Not one of the typical must-see places in Greece, Milos has a quiet charm about it that the other two islands didn’t quite offer. About the size of Mykonos and Santorini combined, you never have to worry about overcrowded beaches because more often than not you can have your own private beach.

The end of our Greek island travels basically meant the end of my pre-exchange journey as the next part involved me travelling through Greece, England, Belgium and the Netherlands all within 24 hours – the things you do to save a few hundred dollars!

I’m going to have to keep you waiting about my time in Tilburg, but if you’re still undecided about what uni to go to then youtube ‘Biercantus Tilburg’ – lets just say it involved 3000 people sitting in a hall singing Elton John and The Lion King drinking beer!!