It’s been roughly a month since I moved to Japan and to be honest the first few days was absolutely HECTIC!

Getting out of the airport, the first thing that happened was a greeting in Japanese by the host university’s teachers and students. And of course, for me, who hasn’t spoken in Japanese for a few years, had to say hi embarrassingly in English.

The first night ended in the speed of light as we were brought to a hotel near the airport and were assigned with a roommate for the night. 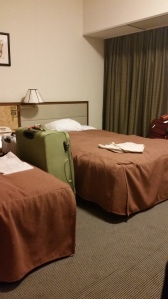 On the second day however, we were finally driven to our dorms located in Sagamihara City in the Kanagawa prefecture. This took almost 3 hours from the airport so we arrived at around noon just in time for lunch. After lunch though, the 2 week long orientation began. We were told to attend many lectures across all topics throughout the 2 weeks and surprisingly, they put the internet services and mobile networks lecture last. 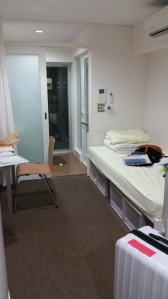 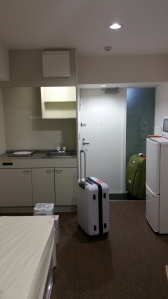 Living in a foreign country without Wifi wasn’t particular the best part about studying abroad though. This basically meant no form of communication, no maps, no internet and no games (99% of my games are net based) except for 2048.

To add onto the misfortune of not having wifi, within the first week of my life in Japan, I have already experienced my share of earthquake!

It wasn’t so bad, since I live in a relatively sturdy building but it DID have a magnitude of 4, which I realised the next day. But, as a new student who just moved in, I of course panicked like the other 120 international students who I live with, running around, unsure of what just happened. It didn’t seem like a big deal though, because none of the other senpais seem to care about it.

On top of experiencing the first earthquake of my life, a typhoon also hit us in the same week, locking us in dorms with no wifi! At this point nothing can get worse for me. Instead of actually going out to explore, I spent the day thinking about where I should go after the typhoon calms down. On the other hand, I finally got a chance to read the books I brought over.

The first weekend was the most exciting days of the week! It was when we can all go off and explore freely around the area and downtown Tokyo. For me, going to the centre of Tokyo was quite a trek since it takes almost an hour to get there by the JR Line. Thankfully, I have been jetlagged for the whole week so I ended up waking at about 6am in the morning.  The first thing I wanted to do was to watch the movie Boruto, so I decided to go to Shinjuku on the first Saturday. Luckily I was also able to get a copy of the manga book which was exclusive to only viewers at the cinema.

On Sunday, instead of going to downtown Tokyo, I decided to go to Yokohama instead, mainly because I wanted to ride the huge Ferris Wheel and visit the cup noodle museum. I started the day off with visiting Chinatown. Unlike the Sydney Chinatown, the one in Yokohama was much bigger and in fact, so much bigger that I even got lost! I enjoyed the trip though because it was filled with the best Chinese cuisine all over the place.

September has also been a month full of celebrations all over the Tokyo so I took up the chance to visit Asakusa and their famous temple, Sensoji. On the day I went there was a festival so various food stands were set up all over the place such as the yakisoba (Fried Noodles) stand and the choco banana stand which are both famous snacks for a festive occasion. 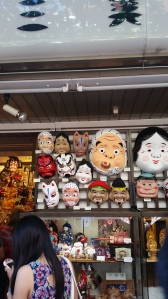 This is basically the sum up of my experiences in Japan so far, but I will definitely continue to blog the rest of my journey as well.