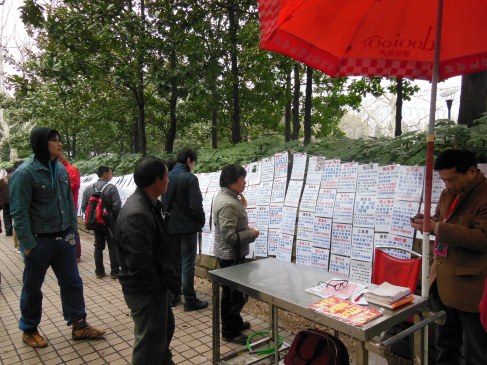 An unexpected and initially curious aspect of local culture, I encountered during my first weeks in Shanghai, was the phenomenon of the city’s public marriage market. Each weekend scores of middle-aged and older parents can be seen, flocking to Shanghai’s People’s Park, in search of a suitable marriage partner for their single adult sons and daughters. The national flags of Japan, England, America, Australia, Germany and South Korea etc are pasted on the pavement to represent the different nationalities parents view as acceptable spouses for their children.

I was struck at the invasiveness and apparent lack of boundaries for those involved in such an exercise, in which an adult’s personal details and romantic preferences are put on public display for all the world to see. Moreover, the concept of a marriage market seemed an odd cultural tradition in the sense that I never envisaged that such private matters would be aired so publicly in China.

However, engaging and conversing with the middle-aged parents at the market transformed my visit into a more meaningful cross-cultural interaction. As a consequence I am able to draw some parallels between my own culture (Sydney’s inner-west) and the culture of my host society (Shanghai), which are not so visible at first glance.

The concerns of parents for their children’s future is a common value that resonates in both societies despite their immediately apparent differences.  Living in a modern industrialised society is something young Sydney-siders share in common with these single adult children. This environment demands an incredible pace and often imposes long working hours, leading to great prosperity but leaving little time for young people like myself to negotiate their private lives.