I didn’t really know much about Toronto before I came here and when someone asked me why I had come here, I didn’t really know how to answer that question either. The first thing that struck me when I first arrived would have to be the weather… Leaving Sydney on a 35 degree day, I was welcomed to a chilly winter night well below 0 when my plane landed. The next day, I was able to see the crisp white blanket of snow.

Living in Sydney most of my life, I really enjoyed seeing the snow every day. Arriving 1 week before uni started, there wasn’t much time to explore Toronto. With no on campus living options, I was staying far off campus with distant relatives. The first trip to uni was quite interesting as Toronto has separate transit systems in different areas. Servicing the Greater Toronto Area, Go Transit was the way to get into the city or Downtown as everyone else called it. The Go buses are more like coaches and most lead to Union Station as its final destination. They’re quite spacious!

The most interesting thing I found about Downtown Toronto was the fact that it was home to an underground city. The PATH is an underground walkway stretching 28km connecting office buildings and shopping centres together. Along the path are a mass of shops and various services. It was the best way to walk around Toronto without having to brave winter temperatures, especially useful when the temperature hit below -10 degrees. The best part was that it was connected to the university management building so I never had to go outside when the weather got really bad. Just try not to get lost since it is like a maze…you may never find the exit…

I found that Ryerson University was quite similar to UTS. The Ted Rogers School of Management was new and a block from the old main campus building. I had all my classes there too meaning I didn’t have to brave the cold weather crossing buildings.

Right next to the Management building was Dundas Square and the AMC Theatre. Apparently, because of the small lecture theatres at the university, some of the larger lectures are held inside the theatre. I’ve been told the comfy theatre chairs usually means more sleeping than studying.

Being the only one coming from UTS and Sydney altogether, I was keen to find new friends. Meeting new people was at the top of my list when going on exchange. And not to play on the stereotype, but Canadians are really nice and welcoming.

Before uni got hectic, I managed to explore the southern Ontario vineyards as well as Niagara Falls!

Me and a couple of other exchange students even got to try out curling. It is definitely not as easy as they make it look on tv…

The university recently held its Blue and Gold Ball. The guys suited up and the girls got their gowns on. It felt like Year 12 Formal all over again! 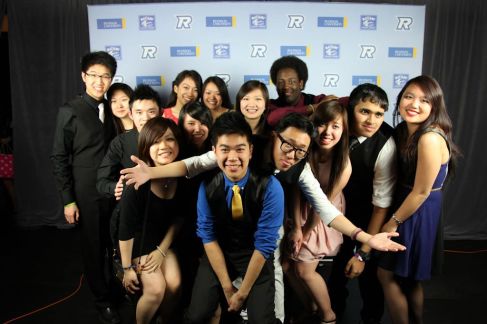 Although there aren’t many big attractions in Downtown Toronto, there are some places that catch your eye. Including the CN Tower which used to be the tallest tower in the world until a few years back. It’s complete with its own Skywalk experience and 360 Restaurant.

In between assignments and preparing for final exams, the exchange students managed to catch the Blue Jays, Toronto’s baseball team at the Rogers Centre. It was the last game of opening week with the Blue Jays playing against the Boston Red Sox.

With final exams nearing, my time at Ryerson has gone by pretty quickly. I’ve found Toronto to be quite interesting and there are still many places that I haven’t been able to explore in Downtown Toronto and Canada altogether. I’ve made many new friends and Canada really is as diverse as people say which means culturally, it is pretty similar to Australia. Although I still miss my friends and family in Sydney, I will really miss the friends I’ve made here when I have to go back. The exchange experience was definitely worth taking!